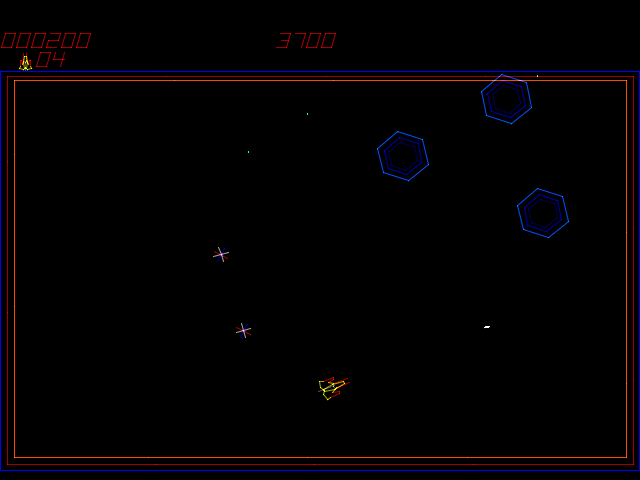 Zektor is a multi-directional shooter arcade game created by Sega in 1982, which challenges the player to pilot a space ship in a quest to recapture eight cities that have been captured by alien robots. Each city is different with a different name as are the robots. The robots also have speech synthesis so that they can verbally challenge a player to retake the cities they control from them. The first wave takes place on the defense grid. Game play The Cities There are eight cities to reclaim in Zektor. The robots personally name their conquered city in the level's opening challenge to the player. The cities are: Ascella Baitos Centaurus Denebala Eridonus Faltar Graffas The final city is a secret city, supposedly conquered by a robot from the past. The Defense grid The Defense grid is a zone outside the city where the player must take on dangerous Roboprobes that are highly maneuverable and fire "Zizzers" (energy blasts) at the player as well as moving Moboids that either destroy the player's ship on contact or deflect the player's ship in some preprogrammed manner. The defense grid lasts for three attack waves which must be outlasted to advance to the next challenge: The destruction of the Robot overlord that controls the city. Destroying the Robot With the three attack waves of the Defense Grid overcome, the player now gets to destroy the robot overlord and free the city. The Robot in question starts at the center of the screen behind three rotating barriers. Each barrier has a slot on one of its sides and when all three align they form a channel in which the player can fire through and thus hit and destroy the Robot head inside. To make things more challenging the Robot fires "Zizzers" constantly at the player and the Robot shrinks inside the barrier system so that only anything but a direct hit dead center will ensure success. Destroying the robot not only saves the city but awards the player with an extra ship. When the Robot shrinks completely from sight the round is over and the player is moved to the next city. Once the player reaches the eighth city this wave will repeat indefinitely once you beat it.

A fixed-screen, overhead shoot 'em up featuring a controllable ship with thrust and free rotation capabilities, similar to its predecessor Space Fury (and ultimately to Asteroids/Spacewar!). Your mission: infiltrate and recapture eight cosmic cities, presently held in thrall by a group of eight alien robots.

Each of these mechanical antagonists (some male, some female) will taunt you in its synthesized voice as you approach its captured city. Once there, you must power through three waves of defense, consisting of drones and fighters - some enemies may be shielded, requiring multiple laser blasts to take out. Down the screen travel the indestructible Moboids, which come in three flavors (one sends ships into an uncontrollable spin, another bounces them away, and another destroys them on contact); the playfield doesn't wrap around, and bumping into the surrounding force-field will kick your ship back.

Once the defenses are repelled, you will arrive at the city itself, where you'll face off against its robot conqueror, surrounded by concentric, rotating shields (a-la Star Castle). The robot will lob energy blasts at you as it tries to escape; if you manage to sneak a shot through the openings in its shields, your award is an extra life.